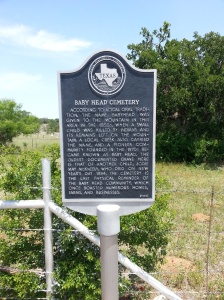 Baby Head Cemetery. Yes, you read it right. Could there be a more troubling name? If there is please don’t tell me, I would rather not know. If you read the plaque in the photo above you will see that the cemetery derives its name from an event that took place in the 1850’s in which a small child was killed on a nearby ‘mountain’ by an Indian. The ‘mountain’ was thereafter called Baby Head Mountain. There was also a Baby Head Creek and Baby Head Village. Quite a morbid group, weren’t they.

When you tell your children that you are going to visit a historical site called Baby Head Cemetery you get some pretty perplexed questions. “Are there really baby heads there?” “Is it like the floating baby head on Phineas and Ferb?”

No, it’s none of those things. But it was a rather interesting place. The oldest grave in the cemetery belonged to a child that died on New Year’s Day 1884. 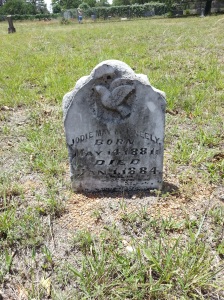 I must admit that it was sobering to see so many graves belonging to children, some had not yet been named at the time of their deaths. Ivy and Willow noticed that some of the graves had flowers by them and so made it their mission to pick wild flowers and place them by the unadorned stones.

With the thoughts of death and loss that are brought on by being in such a place there were still reminders of the hope that we have in the resurrection and reunion of believers that awaits us. 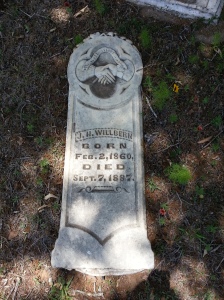 It reads We Will Meet Again.