I thought roads like this only existed in third world countries; used only by colorful buses with fringe hanging in the windows  and way too many passengers, teetering on the very edge of a quickly eroding mountain road. But they have nothing over us because we have the Million Dollar Highway!

After hearing about the lack of guardrails and the certain-death drops we had decided that no matter how inspiring the views it wasn’t worth plummeting to the jagged rocks below just waiting to introduce us to our Maker. Now, looking back, I guess only I had made that decision because Jim was being tormented by the idea of missing those mountain views and so decided to take the risk.

So one Sunday afternoon, after many fervent prayers, we started our ascent of the Million Dollar Highway. The first town we came to was Silverton. With a population of 629 people it wouldn’t still exist if it weren’t for the Durango to Silverton train. We were lucky to find an open restaurant as the last train had pulled out of Silverton the day before and the majority of shops were closed for the winter.

The Brown Bear Cafe was charming and the food was delicious.

With our bellies full and our spines stiffened we were ready to take on the last half of our journey. The cruel thing about the Million Dollar Highway is that it really isn’t all that bad from Durango to Silverton. You’re convinced that its reputation has been highly exaggerated, but the the ride to Ouray lives up to the legend.

Jim had nerves of steel, never once did he give us the slightest idea that he was even concerned over our safety. I, on the other hand, was nearly hysterical and could barely bring myself to look at the terrifying precipice that lay only inches (truly, only inches) from the tires on the passenger side.

But with Jim’s nerves and God’s providence we made it there and back again. It was all I feared it would be and all I hoped it would be. The mountain views were breathtaking. 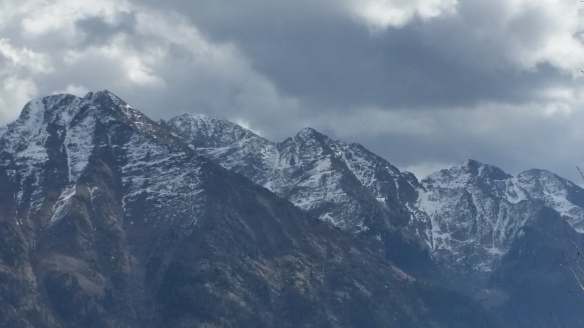 Here’s a video that Jim asked me to take while he was driving; but I couldn’t bring myself to look out the window.

1 thought on “The Million Dollar Highway”