On a cloudy, rain-soaked morning we packed up and left Arizona heading to our summer destination in Buffalo, Wyoming. Jim plotted our journey with the punctiliousness of an expedition to the North Pole.

Because of Lucy we decided to take a week to travel with days of driving no longer than six hours. Jim planned for nursing stops and had mapped out all the gas stations that we could easily navigate. He also found interesting roadside attractions along the way.

Our first attraction was in Hatch, New Mexico known for its hot peppers.

On day two we stayed in a KOA in Santa Fe, New Mexico. This was the best campground of the entire trip. The children played on the playground and in the games room.

The next morning I convinced Jim we should go into Santa Fe and do some site-seeing before resuming our trip. We were told there was a parking lot downtown where we could park our camper, we just had to find it. After several wrong turns we ended up on a dead end street and that is where, after maneuvering a 35ft camper attached to a 12 passenger van backwards down a narrow street between parked cars, Jim earned the well-deserved title of Master Driver with Expert Skills of Driving in Reverse. It was a sight to behold, but one I hope I won’t have to behold again.

After making our way through New Mexico we headed into Colorado and stopped at Grampa Jerry’s Clown Museum. Not so much a museum as a small one room house packed with clown themed paraphernalia. 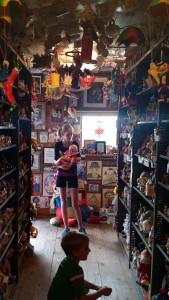 I’m still having nightmare about this one. 😉

Finally in Wyoming we stop at our final roadside attraction, the Chugwater Soda Fountain. Wyoming’s oldest operating soda fountain and the only reason to stop in Chugwater. 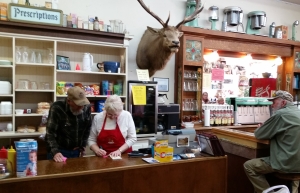 I have never been to Wyoming and had you asked me where Yellowstone Park is located I would have hung my head and admitted that I had no idea. And if you would have told me that it is in Wyoming I might have questioned your geography because when driving through eastern Wyoming on I25 you could have more easily convinced me that I was on the surface of the moon.

Wyoming is the least populated state in America and parts of it are extremely flat and bare, but as you get closer to Buffalo the ground begins to rise up in rolling green hills and in the distance the snow covered peaks of the Big Horn mountains appear on the horizon.

This breathtaking land is where we will be spending our summer.

2 thoughts on “Arizona to Wyoming”