The Prophecy of Mary Anne, the prequel to The Village Green, is now available for purchase.

Reading this has left me with a desire to read the first book. The world is changing and with those changes, new laws and regulations have been enacted, but some of these appear to just be created on a whim. Twin sisters, Mary Anne and Susan live on a farm with their folks and thanks to Mary Anne’s unique gift, they know that things are only going to become more difficult. Strong story line with characters that jump right out of the pages and quickly pull you into the story.
https://www.goodreads.com/review/show/1941031477

My daughter Ivy recently asked me what my dream job would be. I of course answered, a British actress (think Judi Dench), or a famous author (still working on that one), but a close third would be a Colonial Williamsburg (C.W.) actor-interpreter.

I did not know what to expect from Williamsburg. So when I went downtown in search of a bookstore I was in awe! The period buildings, the college where Thomas Jefferson attended, and of course Colonial Williamsburg.

While we were there we were able to spend time with Jim’s brother and sister-in-law. Here are the children with their cousin Noah.

Jim and the children watched a play which strove to portray what life might have been like for slaves at this time. Apparently it was very good. I wouldn’t know because I had to leave with a screaming baby (Lucy).

Later they found me sitting on a very uncomfortable tree root after she had finally fallen asleep.

What else can I say? If you love history and beautiful surroundings you should visit Williamsburg.

After being in the West for most of our travels I yearned to head east to see where it all began.

Jamestowne, VA was our first stop. The first permanent English colony, it was home to such famous names as Captain John Smith, Pocahontas, and John Rolfe. Just walking among the ruins and the archaeological digs sent tingles up my spine. (yes, that’s a bit nerdy, I know)

Did you know the inhabitants went through a time of famine and there was an alleged case of cannibalism? Neither did I. The history is absolutely fascinating.

Do you know where Pocahontas is buried? No, not in Jamestowne. She is buried in England.

Outside of the island there is a magnificent museum, a period village, and replicas of the Susan Constant, Godspeed, and Discovery.

This is a place I hope to return to again. There’s really too much to absorb in just two visits.

I really enjoyed our time in South Dakota, though we were only there one month. Rapid City is a lovely small city with lots of family friendly events during the summer. In the middle of downtown is Main Street Square where there is a splash pad, umbrella covered tables, and space for the children to run. (That’s fake grass. They take it up in the winter and turn it in to a skating rink) They also have free outdoor movies and concerts. I took the children to the splash pad several times while we were there.

While we were there the city had a pumpkin festival. I love pumpkins!

You can learn about our presidents through a guided tour of beautiful statues downtown.

And if you happen to be in to graffiti, there’s a place for you. 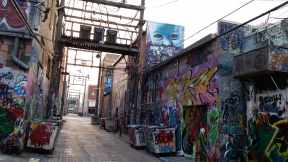 We took a lovely train ride.

And much more. It was a great time.

We’ve all seen it before. It might just be the most famous icon of America (next to the Statue of Liberty). As a matter of fact I had seen it so many times, in one form or another, that I wasn’t terribly enthusiastic about seeing it in person. How incredibly short-sighted I was.

The park we stayed in while in South Dakota was only 20 minutes from Mount Rushmore and there is a certain point when you round a corner on the road where you can see George Washington’s profile. At that point all my previous apathy toward the monument was transformed. My mouth hung open and my eyes bulged and there were still three presidents waiting to be seen.

It was not only the sheer size of Mount Rushmore, nor the amazing skill it took to create this colossal sculpture, nor even the fact that in the 14 years it took to sculpt this mountain in to a work of art not one of the 400 men involved died; no, it was more than all of these.  It was a feeling of nostalgia for a time I never lived in. 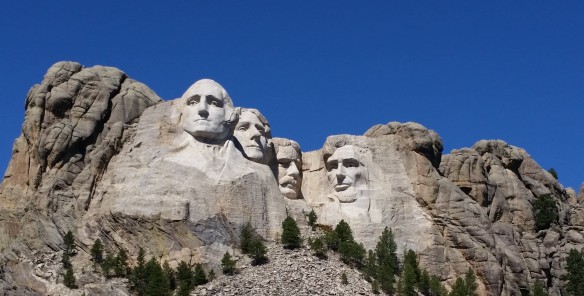 Mount Rushmore was created during the Great Depression and yet there was more hope and reverence in the act of creating Mount Rushmore than I think I have ever seen in my entire lifetime or ever will.  It speaks of a time when America still strove to be great and Americans still thought their country was the best place to live. The people weren’t preoccupied with bringing everyone one down to their level, but recognized that it was partially do to the brilliance of these men and others like them that made America the envy of the world. 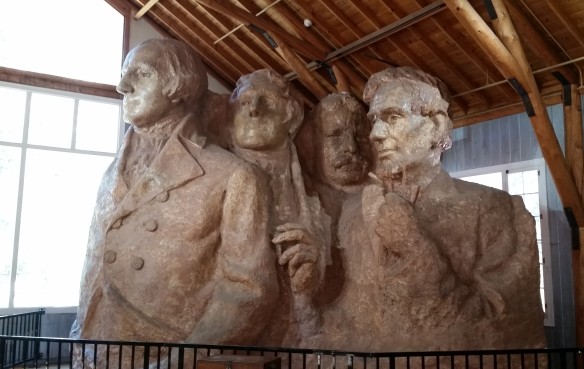 If you have the chance to see it don’t pass it up.

While in South Dakota we visited the Pine Ridge Indian Reservation; home to the Oglala Sioux tribe. The people of this reservation are among the poorest in America. Third World is the best phrase to describe their living conditions. It is not out of the ordinary for a home to be without running water, indoor toilets, and/or electricity. The teenage suicide rate on the Pine Ridge Reservation is 150% higher than the U.S. national average for this age group and the infant mortality rate is the highest on this continent and is about 300% higher than the U.S. national average. It is a sad place with a sad history.

Within the reservation is the site of the Wounded Knee Massacre of 1890 when the U.S. Army’s 7th Calvary butchered at least 150 Sioux Indians, half of which were women and children.

We went with the intention of visiting the cemetery which holds the remains of those most unfortunate people, but we also got a surprise lecture about Wounded Knee given by a descendant of one who was there. 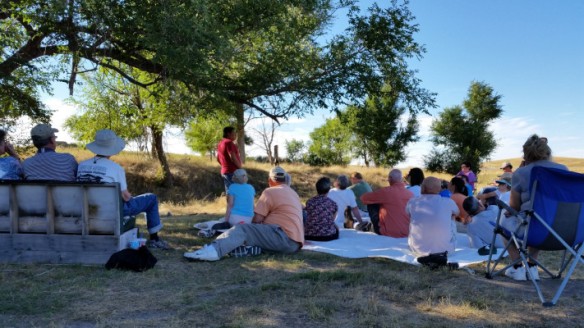 After this we visited the cemetery across the street. The little girl in the above picture, her name is Kimmy, asked if she could hold Lucy; we couldn’t say no.

The story goes that a baby was found four days after the massacre still alive. She was adopted by Gen. Leonard Colby and his wife as a kind of souvenir of the Wounded Knee.

It’s heartbreaking to see a people so defeated that they still live under the shadow of the past 126 years later.

After leaving Wyoming we spent a month in Rapid City, South Dakota. Right down the road from the RV park we stayed in, is the America’s Founding Fathers Exhibit.

If the photo above looks familiar to you, it should. It is a copy of the famous Declaration of Independence painting, but in sculptures. It is absolutely stunning! When we walked into the room holding these sculptures I immediately began to cry. It was completely involuntary. My children looked at me in amazement not sure what to think of this outburst of emotion, but a lady clad in Colonial dress handed me a tissue as though she had expected me to burst into tears. She told me that I had walked straight to the artists viewpoint, where all the signers could be seen at once, and this perspective has brought many before me to tears.

Along the walls are pictures and short biographies of the signers. And while you gaze into the faces of these brave men you will hear a recording of stories of their involvement in the acts that brought our country to freedom.

The link below will lead you to photos of the artists who brought this painting to life.

The building is a replica of Independence Hall in Philadelphia.

Families On The Road

A place where books and imaginations spring into life

The official blog of Realm Makers, the only symposium for people of faith who love speculative fiction

Adventures of a 1961 Shasta Airflyte

Travel Tales With A Twist